THE MAN IN PLAID

THE MAN IN PLAID

“Life’s tragedy is that we get old too soon and wise too late.”

There's a moment, in the film 2001: A Space Odyssey, just after Dr. Heywood R. Floyd arrives on the Lunar base and then just before he gives a speech on the epidemic to a group of assembled scientists at the council meeting - which of course, is being used as a distraction to cloud alien contact. When a photographer in a rather nasty plaid suit, which seems to denote a man out of place and on the make, photographs Dr Floyd, sitting with his back towards us.

In front of him, the photographer takes up his stance, firming up his grip on his 21st century black gun-like image making device, holding it tightly and then taking aim at the good doctor. When satisfied, he steps backwards, his actions hurried somewhat, as he finds a new position again, further away this time, before taking careful aim once more. The procedure is repeated one more time before he then walks around the back of the seated scientists to come back again on the left-hand side of the doctor, to take one last shot from an oblique angle.

No-one in the room has acknowledged his presence. Not one person has paid him any attention at all. Least of all Dr Floyd, who has been ensconced in discussion all this time, and who has directed not even a solitary glance at him. Even when the man in plaid was standing only two feet from him. When confident that he has all the shots he needs, the man in plaid approaches his superior, who turns to meet him, yet barely acknowledges him, to inform him he has all that he needs before leaving the room. Again, unseen by anyone.

This is when the real action takes place, of course, just after the photographer has left the room. This is when Dr Floyd stands to walk over to the lectern to give them all the breakdown on how the Tycho Monolith, at site TMA-1 is an alien first contact and that there's a directional beam pointing out towards Jupiter.

Two things are apparent from this scene.

First, yes, the obvious thing being that people of the 1960s, OK Kubrick, saw no place in the future for people of colour, as everyone in the meeting was white. In Kubrick's future, he must have imagined that nothing would ever come from the Civil Rights struggles raging at the time he would make his film.

That absence, in this imagined future, is of course down to Kubrick not seeing any place for their inclusion in the present time of 1968 either of course, as people of colour are almost absent in his film except for one, ambiguous flight attendant who tends to a sleeping Dr Floyd as his craft approaches the moon.

The second thing which is apparent, is that people of the 1960s, OK, Kubrick in 1968, himself a photographer, also saw no real importance for photography, or those who produced it, in the future, beyond the recording of moments which alluded to importance but were in fact always very much outside and beyond it.

Perhaps I'm projecting here, but I also saw something of how this photographer, this inconsequential figure dressed in plaid, seemed to enjoy his proximity to power. His hurried movements revealing an excitement of being in the room at such a monumental moment. Even when he was always so removed, as much from power, as he was the truth of the meeting.

I imagined him, the man in plaid, going to a bar on the lunar base later that evening where he’d meet up with his mates to tell them about his brush with the renowned Dr Floyd before such an important meeting. He’d bask in the glow of being there, of course, before then hypothesising about how the epidemic will play out while he downed a concentrated Old Fashioned from a plastic tube. As a Boozey-Tron 9000 brought over another round for him and his mates.

I also imagined further, that on the next day ,he'd post his outtakes from the meeting on his social media page, you know the shots he liked but the picture editor didn't (because they never use the ones you like, do they) again to bask in his apparent proximity to power and then give his thanks to whatever odds or sods hired him for this gig.

Maybe I think too much?

Anyway, I love hearing the stories of photographer friends. Especially those which detail meetings with the great and the good and tales of close-proximity to power.

One friend has a photograph of himself with Col. Gaddafi. Where Gaddafi, before the cold steel of 'Western liberation' was thrust up him, has my friend in a playful headlock. He has other photographs too of him hanging out with (after press calls) Mandela, Michael Jackson, Oprah and many other celebrities and politicians. But again, what do they mean? These photographs? Or the telling of these stories which accompany them?

What do my own less potent brushes and ensuing tales of the decidedly average tell about me and why I continue to recant the stories of my own proximity to mid-level power?

My stories of hanging out with ex cabinet ministers, c-list pop stars and nominated writers.

What do they mean?

Especially when I imagine that their meeting with, just like the fans who ask the famous to pose with them, barely resonated with them above a perfunctory obligation thrust upon them to promote a book or some other sad attempt to keep the candle of fame burning that is being consumed by the darkness of anonymity.

Every photographer worth their salt has, and yes, everyone else has their lame-assed stories which they churn out to impress people about their brushes with the great and the good and their close-proximity to power.

Perhaps the only thing these stories tell us is the potency of our desires to be in another place. A place above or beyond our current standing or station. For photographers, perhaps this place is found in front of the lens rather than behind it?

Perhaps photography for so many of us is just a key to a door or a portal to a different world. One that would otherwise be unobtainable to us without the camera.

Because it is not us or indeed not the man in plaid, welcomed into these new worlds, or in his case,  into the room with Dr Floyd, but the camera. It is only ever the camera.

We, those men and women in plaid, are the interchangeable interlopers who cannot ever enter these worlds, or be close to these people, without it.

And the man in plaid? Well, he just seemed so excited to be there, in that room. So excited and happy to be in the presence of all those powerful people. His hurried and excited steps giving him away.

But just as Dave Bowman, who would - spoiler alert - stop HAL 9000 before his close encounter with aliens later in the film, the man in plaid had entered a new dimension.

One that appeared the same as his own, but he knew never was. One where he could see them, but they, these people from a different world with power, never saw him.

Somewhere in the imagined future, of that man in plaid, unseen by his betters. When he and the world finally learn of alien contact, his photographs of Dr Floyd will grow in importance, as will the gravitas of the ensuing stories he will tell of that encounter.

Perhaps more people will now want to hear his tales, if only to live vicariously through his close encounter with Dr Floyd's fame and power. Even though the man in plaid, yes, that man from another dimension, was always so far removed from it. From power and the lives of the people within that room, he had left so hurriedly.

The room he only ever gained entry to, to flirt briefly with its rarified air, because he had held in his hands, so tightly, a 21st Century black gun-like image making device still called, even in Kubrick's imagined future, a camera. 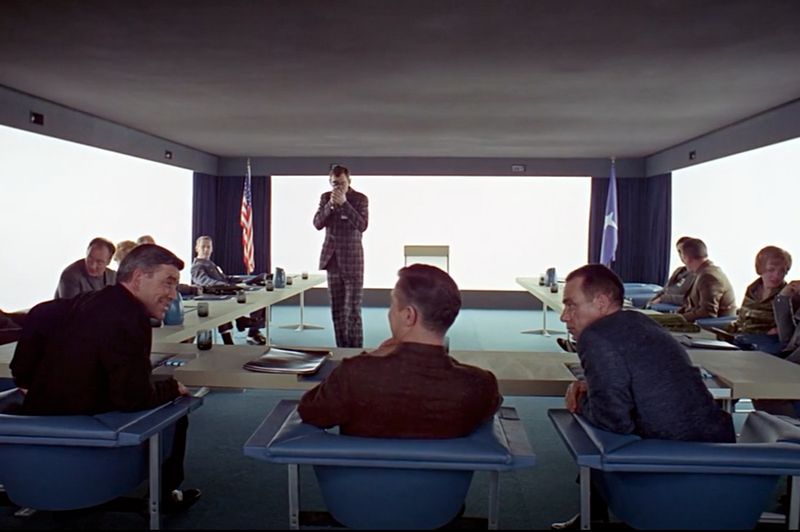 The man in plaid