"You can speak well if your tongue can deliver the message of your heart."

Last Thursday, 14th my sister Bev told me that I needed to come home to say goodbye to dad.

On Tuesday, 19th I photographed the bed he died on.

Well, the stripped-down hospital bed he had at his home, the sheets taken off to reveal a crimson red mattress and the words ‘feet this way’ inscribed on it at the bottom, yes, where his feet were.

Later, at the chapel of rest, just up the road from his home, I photographed the golden coloured tassels which hung from the dark green velvet shroud which covered him. Just one slightly soft photograph. Perhaps if only to stop myself from staring at his face and at his opened mouth which I hoped so much to breathe just one more time.

I still don’t know why I photographed those tassels.

Photography allows us to see so many things but also perhaps to see only that which we want to.

But of course, that’s all down to framing.

The American director John Ford once spoke about his experiences in Normandy, on D-Day. And how he had witnessed, from a foxhole, African American soldiers, under withering enemy fire, unload crates of ammunition for the advancing white troops. He never filmed it – even when he had a camera in his hand. Their bravery was never recorded and as such never added to the annals of the invasion or indeed the history of American conflict in the European Theatre.

In this light, it perhaps never happened. And they were never there.

I often wonder why we choose to frame and represent the world as we do? Even when I am aware of the external demands and impositions placed upon our framing.

For a representation to be accepted as ‘truthful’, of course, we must construct the representation in ways in which the audience already perceives it to exist. This ‘truthfulness’ is compounded further as only those representations that shore up and maintain a society’s dominant fictions of the world are accredited as valid and dutifully enforced.

For the case of this argument let’s call the gatekeepers of Photo Land the enforcers of society’s valid representations or framings. Those tasked to consider what is ‘good’ framing or ‘bad’ framing.

From educators in classrooms who never ever discuss the work of photographers of colour in their timeline explorations of photography, to curators, picture editors, funders et al. who seek only those they deem best able to solicit good framing. The gatekeepers regulate the framing.

By the way, let’s momentarily return to those same educators again, who each year send Black students my way because they feel ‘uncomfortable’ talking to them about their work.

At one point I had once foolhardily deluded myself that photography was a universal language. One which rose above the barriers of culture, language, or religion and transcended them.

But that was a lie a gatekeeper had once taught me.

I am a Black man. I do not see the world in the same way a white person does.

The ‘Double Consciousness’ of my gaze allows me to see through the filter of whiteness but also then to see the inherent lies within it in order to ReFrame and re-situate myself within it.

Incidentally, how do Black photographers ever expect to create careers in photography when the role of photography, in majority white countries, is to prioritise whiteness?

Those brave African Americans risking their lives under that withering fire on Omaha Beach to support a segregated army that had deemed them unfit to fight within it. Those Black soldiers who acted with great courage that day on that bloody beach. Those who fought against German fascism, a fascism based incidentally upon American models of race, perhaps made little sense in Ford’s world view and his notions of American dominant fictions of its manifest destiny.

So, he simply kept his camera lowered and excluded those Black figures from the American framing of the war, and the world. He enacted the protocols of symbolic annihilation and removed them from the frame, the narrative and from history.

As I sat on the pink plastic chairs in the chapel of rest. Alone and in the coldness of that room, with my father just two feet away. Perhaps the act of raising my camera and focussing on the golden tassels, which adorned the deep green velvet shroud. Was my attempt to exclude from the frame that which didn’t fit into my own dominant fictions of the world.

Those fictions which told me that dad would always be there somehow. That I would always have him to talk to. To sit and watch Scooby Doo cartoons with and laugh at like crazed buffoons or deconstruct reruns of [insert any episode of Murder She Wrote or Hart to Hart here] with great vigour.

Perhaps I’m still not ready to see beyond this framing, not quite ready yet for reality to become real.

And there we have it. Photography has once more saved me from seeing the world as it is. 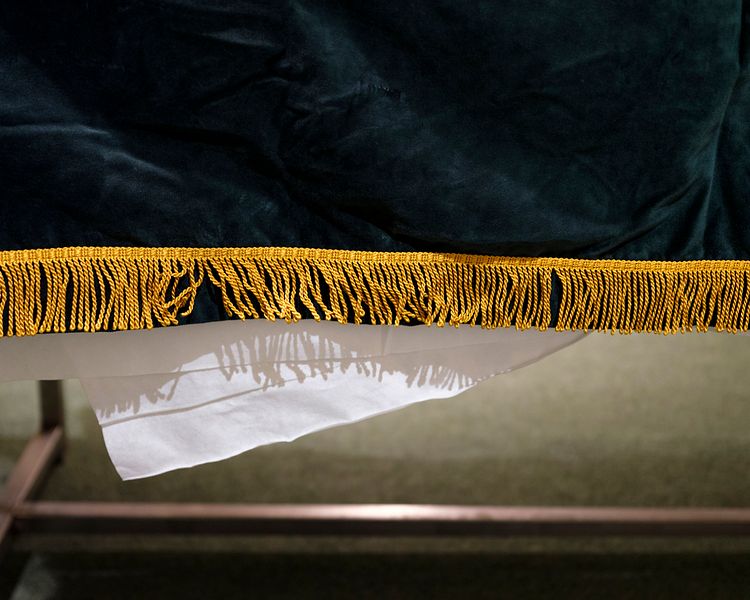