When it rains all of this will turn green she said. The brown dry hills, up above will be green and lush once more, we all need rain she sighed, as rain is life.

But the hills up above, with the expensive houses, and the good life which lives up there, are not yours I thought, and never will be, as I nodded my head and smiled in agreement at her.

A week later, someone else, Maxine, would tell me about her farm and about the crops she's planting. She paused, drifting off slightly into that world where hope, longing and wishes live, and then she too told me that she hoped for rain.

We all want what we can't have. Those with sun want rain and those without, well, they live in Britain.

It's almost three weeks now since I awoke to a Pea Dove calling me from sleep on that first morning in this new world. Three weeks of kicking my foot into doors and pitching my 'project' again and again to strangers trying to get them to share and invest in someone they don't know from a bar of soap.

Yet, here I am, watching facial responses and body language and tuning the pitch accordingly to work for each individual. "I've always been an admirer of those who protects others," I say to a cop, whilst thinking about the terror they inflict on their own people here, in order to maintain the status quo and the gap between the haves and the have-nots. But you say what you need to get that foot in the door.

Once in the door though, I've taken some terrible photos. I've known this even while looking through the viewfinder and yet I've still taken them, feeling that sinking feeling inside as I've depressed the shutter release. Shooting in the hope of shooting my way through it in order to find my flow.

I lost it a little earlier this week and for two days didn't take one photograph, I didn't leave the apartment and dwelled on it all. I dwelled on failing, fucking up and not making this trip work.

Creativity thrives in a mind, which is free and open. Yet, my mind, at that moment, was engaged in a Jason Bourne-like hand to hand combat with fear for fear's sake; the fear of making shit work whilst also living with the fear of not making shit work; as well as the fear of well, what you got?

Phew, there was a lot of fear going on in that paragraph there.

But some wise words from home helped. It’s funny how help comes from places you sometimes don’t expect, until you realise that we’re all in this thing called life together and that I just need to, coin a phrase, just chill the fuck out.

By the way, I'm typing this whilst rubbing my leg as something seems to have bitten the shit out of it in the night. It’s strange how we adapt, at home if I had ants in my bedroom those fuckers would be toast, over here it’s a case of carrying on as you are guys and then I wake up with legs that have been gnawed at like a corn cob and wonder why.

Since the start of the year, there has been a sudden and steep wave of violence against women. I took a taxi yesterday and Byron, my taxi driver, tried to explain the recent attacks to me, "Jamaican men love to have a lot of girlfriends, when they invest a lot in one, if she finds another man, even though he is cheating on her, he gets angry and she gets chopped"

We continue to talk and both laugh at the new ineffectual domestic violence measure. The government do little to stop crime here. The police are a law to themselves, the wealthy who kill get off and the poor are left to kill each other.

On that cheery note, the taxi stops and I ask for a receipt from Byron who gives me his personal number for a pick up later. I get out of the cab and push the receipt into my pocket and think to myself if I don't go through taxi base for the taxi and Byron picks me up no one will know that he has, there won't be a record of it.  He could drive me anywhere!

I don't call Byron back.  Don’t blame me Byron blame the system.

White photographers get a pass here in ways, which black photographers don't. These aren’t my words but the words of the people here. People will let a white photographer come ‘downtown’ for a few dollars but they will “juk up” (stab) the black one. In 2017 a white life is still more valuable here than a black one. White and Chinese lives matter here in ways that black ones don’t – it’s just a fact. And if you don’t, believe me, I still have Byron’s number if you want to give him a call.

Perhaps, rightly or wrongly, there is a perception that if a black body is destroyed the penalties will be less than if a white one is but that, of course, is nothing new read Jill Leovy’s book Ghettoside if you think I have a sliced potato on my shoulder.

So much has happened here that I want to cram into this post but can't. I have met so many wonderful people this week, and maybe I’m finally just getting my shit into gear?  I don’t know, I’m not really sure what I’m trying to say, as I work out how to end this post.

I should just do what I used to at Primary School when asked to write something about my summer holiday for example or some other crap; when I’d usually run out of steam, and couldn't be arsed anymore. No matter where the narrative had progressed to I’d simply write… 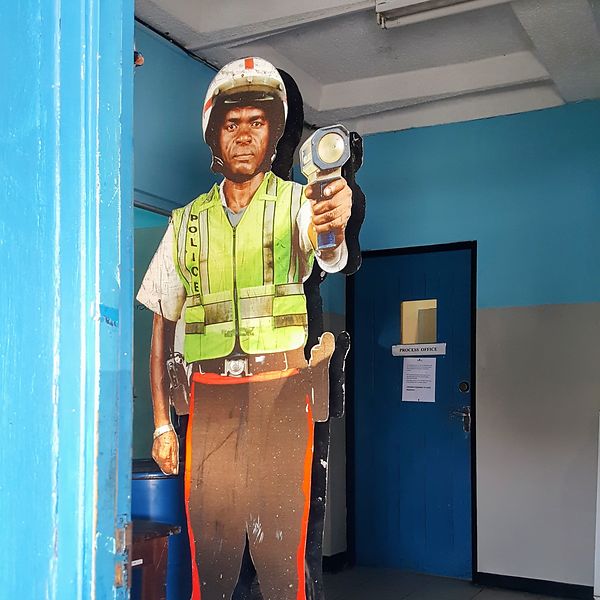