Our eyes lock and I stare at a face that confronts me, my eyes tracing its contours downwards towards a smile; and I’m not sure why but I feel that a life is being revealed to me and a world being made real, if just for this moment at least, as I simply just stand and stare.

Yet, this face, with its smile, is just one amongst a group of other faces; they’re happy, content, I feel, under a sun that gleams down to form a shine upon the faces of these black men, so far from home, and yet so close to their destiny upon a foreign field.

I close my eyes, look away and then walk on towards my next experience.

Shock and Awe by the artist Barbara Walker, currently at mac Birmingham until July 3rd, is indeed an experience.  An experience that stands as powerful testament not just to her skill as an artist but to her skill to reawaken and ‘re-flesh’ the forgotten bones of history, with conté on paper or graphite directly onto walls, but most importantly it is a testament to the forgotten and the denied black figures from history.

It is often not reported that the first shot fired in anger by a serving British serviceman, in the First World War, was by RSM Alhaji Grunshi DCM MM, a Black African man serving in the Gold Coast Regiment who would fire his bullet, no doubt, at another black African man drafted, to be his enemy by their German colonisers.  Two black African men, disposable pawns in Africa, indentured to fight, for the gains of others, in order to preserve the conquests of their European masters.

As the promotion accompanying Shock and Awe outlines, Walker’s intention is to acknowledge “an absence of representation over the past 100 years, Walker’s exhibition concentrates upon the contribution of Black servicemen and women to the British Armed Forces and war efforts from 1914 to the present day. It reflects upon contemporary British conflict alongside historical events of warfare involving Britain and the colonised nations of the British Empire. As the world commemorates the centenary of World War I, this remarkable body of work addresses the stories that remain largely untold.

The First Floor Gallery is notorious for being, quote - ‘hard to fill’ yet Walker effortlessly takes her audience upon a journey back through time – and yes – a journey through the space of the First Floor Gallery; within works which at times takes your breath away, with their scale; whilst also endeavouring to create a feeling of intimacy as we are asked to draw close in towards her works in order to read the fine print of newspaper front pages from the First World War.

We should not forget that the black men and woman in Walker’s work all left their homes to preserve an order that was not meant to be enjoyed by them and that they left home, some never to return, to preserve everything, which we know and enjoy today.  Yet, you will never know; them but that should not prevent the legacy of their sacrifice.

Bullets, TNT and shrapnel, of course, care not of the colour of a man’s skin; they care not for rank or class either, as they kill and maim all within their path; and as such, Walker is not saying that the sacrifice of these black and woman should be seen above those of their white counterparts; but what she is saying is that their sacrifice should at least be acknowledged, recognized and seen.

Soon though this show and its contents will dissolve back into the forgotten histories that bind us; and soon too, Walker, will take a wet sponge and wash away her large wall drawings. Causing the intricately and painstakingly fashioned marks of graphite to smear, merge and then smudge into a heavy dark cloud of history that hides all that which was once there as streams of water fall downwards upon their journey into nothingness.

Below: The Big Secret III Conte and paint on paper. (photo by Chris Keenan) 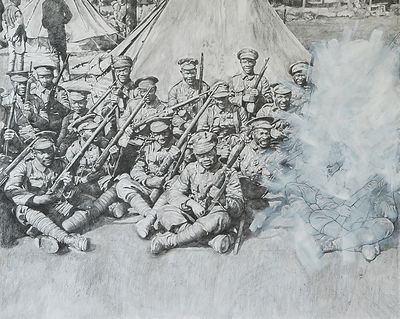 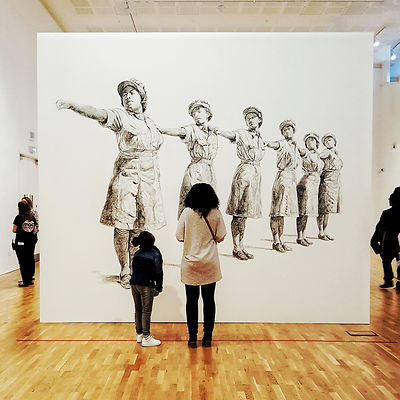